F.C.C. TSR Honda France’s title success followed a race of high drama and high attrition in the southern French sunshine and comes at the completion of another action-packed EWC season, which also featured 24-hour races at Le Mans and Spa-Francorchamps, plus a return to Japan for the Suzuka 8 Hours.

Viltaïs Racing Igol’s Bol d’Or victory meant the four race wins up for grabs in the 2022 EWC were claimed by four different teams, such has been the wide-open nature of the championship this season. And to underline its competitiveness both the EWC qualifying and race lap records at Circuit Paul Ricard were broken by Illya Mykhalchyk (1m51.641s) and Xavi Forés (1m52.979s) respectively.

Up until the final 90 minutes of the Bol d’Or, long-term leader ERC Endurance-Ducati was seemingly on course for victory only to stop with a mechanical failure while comfortably in front. That left Wójcik Racing Team at the head of the pack. But in another late twist, the Polish squad’s Yamaha slowed, forcing Mathieu Gines to push the bike to the pitlane for repairs.

When Dan Linfoot eventually returned the #77 machine to the track, more than five minutes had been lost along with hopes of victory for Gines, Linfoot and Sheridan Morais as France-based Viltaïs Racing Igol, another Yamaha privateer, swept into a lead it wouldn’t relinquish.

Meanwhile, Wójcik Racing Team’s eventual second place represented its best finish of the season with Webike SRC Kawasaki France third in what was Gilles Stafler’s final EWC race as team boss before he retires. Webike SRC Kawasaki France had also failed to land a podium in 2022 prior to the Bol d’Or and actually led for a time before dropping back with an engine wiring issue ahead of its charging comeback.

For ERC Endurance-Ducati riders David Checa and Xavi Forés, their late heartbreak was hard to take after they’d shared riding duties for a large part of the race when Chaz Davies hurt his back and couldn’t continue. Despite the highly emotional scenes in the team garage as a near-certain victory slipped away, Checa regained his composure to return to the action for the last hour following rapid repairs by his German outfit. He took fifth behind the F.C.C. TSR Honda France team, which also made another unscheduled pitstop in the closing two hours having been delayed earlier in the race.

TATI Team Beringer Racing was leading and in contention for the EWC title when it stopped with a technical issue on Sunday morning, much to the disappointment of the French team and its riders Leon Haslam, Grégory Leblanc and Bastien Mackels.

The Frenchman was part of the BMRT 3D Maxxess Nevers team that took top Bol d’Or Superstock honours in 2021 and his inclusion appeared to make the difference to the squad, which overcame a late scare when its Honda’s exhaust failed.

Team 18 Sapeurs Pompiers CMS Motostore took the FIM Endurance World Cup title despite dropping out of contention with a mechanical failure, which took several hours to rectify. However, the Superstock win at Le Mans and a second place at Spa-Francorchamps were enough to secure the title for the Yamaha-powered team, which counted on riders Baptiste Guittet and Hugo Clere from France plus Austrian Philipp Steinmayr. 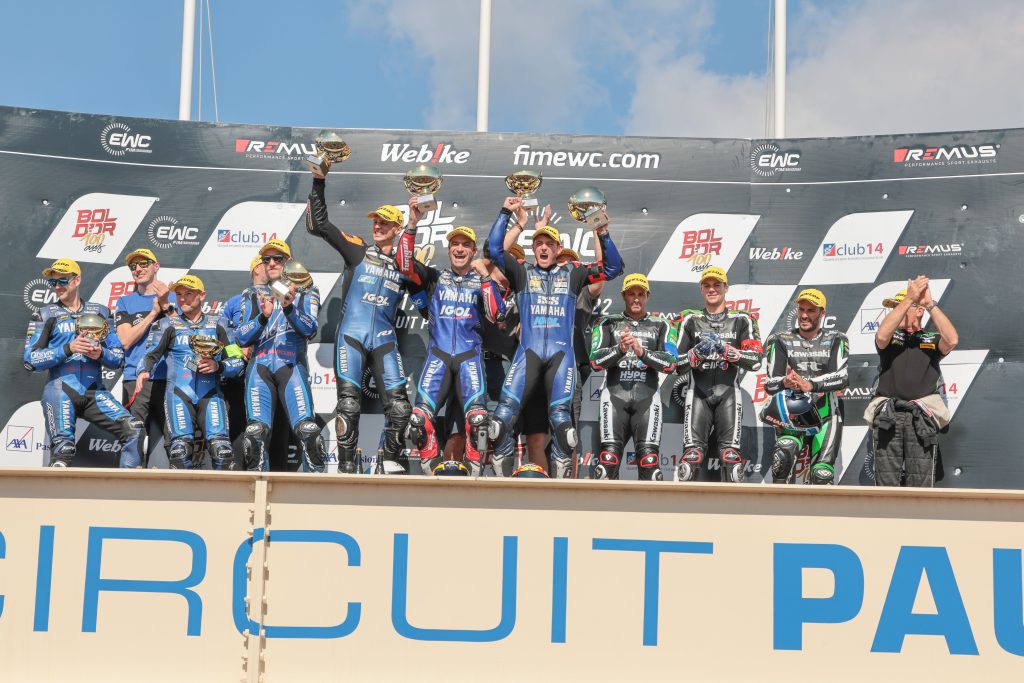 For F.C.C. TSR Honda France, its FIM Endurance World Championship title success follows on from the 2017-18 season when Josh Hook was partnered by Freddy Foray and Alan Techer to the EWC’s top prize. The Japanese squad was one of five outfits in a firm fight for glory starting the Bol d’Or but prevailed as its four rivals hit trouble. All-season riders Mike Di Meglio and Hook were joined on the #5 Honda for the final event of the year by Alan Techer in place of Gino Rea, who suffered serious head injuries in a crash at Suzuka last month but helped F.C.C. TSR Honda France to podiums in the 24 Heures Motos and the 24H SPA EWC Motos earlier in the campaign. Defending champion Yoshimura SERT Motul placed second in the final championship order with Viltaïs Racing Igol third. All results are subject to final confirmation.

Steven Odendaal (Viltaïs Racing Igol, Yamaha YZF-R1, winning Bol d’Or Formula EWC team rider): “This race has been incredible. To be in a French team winning on French soil is just something amazing. Yannick Lucot, my team boss, had a really big dream of this day and my team-mates and I, we fulfilled this so we’re really, really happy with this victory. Obviously we did not expect this, we just knew we had to make everything the maximum and we just did this and finally we’ve got this big trophy, which is amazing, and I’m really happy to walk away with my first EWC podium being a victory.”

Josh Hook (F.C.C. TSR Honda France, Honda CB R1000 RR-R, FIM Endurance World Championship winning team rider): “I know from the past never to think the race is over until the chequered flag. We’ve come back from much worse situations and won races in the past. We did run into some dramas as everyone else did it seems. We never gave up on it and just kept chipping away. We did a lot of really good race runs all throughout the night and we were consistently fast all three of us. Basically we were going to see where we were at when the sun came up in the morning but we never counted the win out at all. But it came to a point in time when we had to toss up whether we focused on the championship, which is obviously our main objective, or the race win. We decided to take care of the engine after getting a little nervous and seeing everyone else’s bikes blowing up and there wasn’t many left in the end. We tried to be as conservative as possible and just bring home the championship for our team, Honda and all our partners.”

Wayne Tessels (RAC41-Chromeburner, Honda CB R1000 RR-R, winning Bol d’Or Superstock rider): “For us it was a really good race. The second part was quite difficult for me personally, but I was very happy that the bike worked well and also my colleagues Jonathan [Hardt] and Chris [Leesch] did a hell of a job, a really good job. I’m also really happy we took this win because at Le Mans Grégory Fastre, our team-mate, had an injury, which was pretty bad, and it’s also for him that we finally won and I’m happy to be on the podium here.”

Philipp Steinmayr (Team 18 Sapeurs Pompiers CMS Motostore, Yamaha YZF-R1, FIM Endurance World Cup winning team rider): “It was a tough race, like a rollercoaster up and down, up and down. It’s great to win the World Cup, we managed it with the points, we had a good qualification and the team worked perfectly all season. It was a good job by all.”

The opening laps of the 100th-anniversary delivered more classic FIM Endurance World Championship action with Gregg Black, Mike Di Meglio, Xavi Forés and Markus Reiterberger all taking their turn to lead the EWC season decider. But it was Forés who pulled off the most spectacular pass, overtaking his three rivals on a sensational slipstream move on the Mistral Straight. Click HERE to relive the moment.

Yoshimura SERT Motul Team Director Yohei Kato spoke of his pride after a mechanical failure robbed the Japanese squad of a possible Bol d’Or victory repeat and a second consecutive FIM Endurance World Championship crown. After Gregg Black held the lead during the early stages, Kazuki Watanabe was on board the #1 Suzuki GSX-R1000R when trouble struck on lap 34. Click HERE to view the full story.

Gino Rea was a much-missed member of the FIM Endurance World Championship family during the Bol d’Or while he continues his recovery from serious head injuries sustained in a crash while practicing for the Suzuka 8 Hours last month. A GoFundMe appeal launched by his family to help his extensive rehabilitation was promoted on live television coverage of the event and across the EWC’s social media channels. All teams were provided with Keep fighting Gino Rea stickers for use on their bikes in a strong show of support for the popular British rider, who helped F.C.C. TSR Honda France to podium finishes at Le Mans and Spa-Francorchamps earlier this season. Click HERE for more information on the appeal to help Gino Rea.