One of the first RISC-V laptops may ship in September, has an NFT hook

It seems promoters of RISC-V weren’t bluffing when they hinted a laptop using the open-source instruction set architecture would arrive this year.

Pre-orders opened Friday for Roma, the “industry’s first native RISC-V development laptop,” which is being built in Shenzen, China, by two companies called DeepComputing and Xcalibyte. And by pre-order, they really mean: register your interest.

No pricing is available right now, quantities are said to be limited, and information is sparse.

The laptop is estimated to start shipping in September, when the laptop’s processor becomes available, according to spokespeople for the two companies and RISC-V International, the instruction set architecture (ISA)’s organizing body.

Here’s a mock-up of the device: 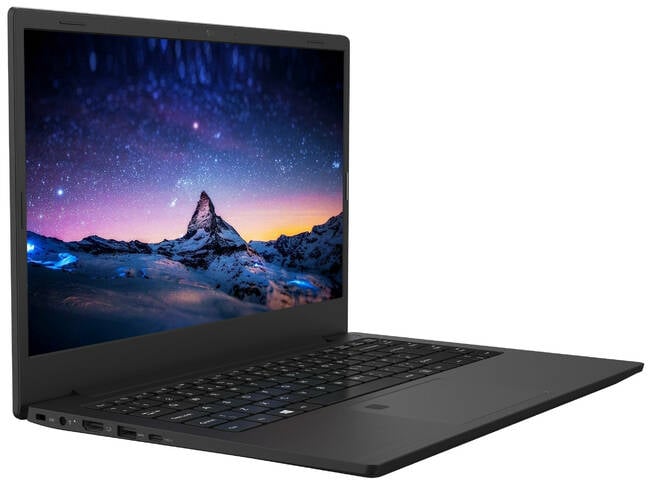 Nothing spectacular, but at least it’s looking pretty thin and light. Click to enlarge

As for the specs, the Roma laptop will, we’re told, come with a quad-core RISC-V processor, an Arm security enclave core, a GPU/NPU accelerator for video and AI workloads, up to 16GB of LPDDR4 or LPDDR4X memory, and up to 256GB of storage. It’s expected to support most Linux variants. There aren’t any other details.

The laptop will also include a RISC-V key, which we’re guessing will serve as a shortcut to a development environment or be a neat but standard modifier key.

The pre-order-slash-interest page seems to indicate the RISC-V processor, which we hope will be 64-bit, will have a pro version that uses a 12nm manufacturing process and a standard version that uses a 28nm node, and it will come on a system-on-module package.

Interestingly, DeepComputing and Xcalibyte said Roma will be the first laptop in the industry to have a motherboard with an upgradeable system-on-chip, and the updates will be free. On the one hand, that sounds generous; on the other, it may mean: the first spins of the silicon will need to be replaced due to errata.

We don’t have any more info on the RISC-V chipset, as the two companies said it hasn’t been announced yet. But the launch of RISC-V silicon for a proper, mainstream-ish laptop will represent a major milestone for an ISA that has largely been confined to development kits, embedded devices, and support cores up until now.

Calista Redmond, CEO of RISC-V International, said the Roma laptop will serve as a “crucial bridge between development boards and RISC-V based business laptops that will be used for day-to-day work.”

Redmond previously told The Register we could see a RISC-V laptop this year, and her colleagues teased a prototype with a multi-core, 2GHz processor at an event in May. We were unable to confirm whether the prototype shown two months ago is the Roma laptop now being promoted.

“Native RISC-V compile is a major milestone,” Mark Himelstein, CTO of RISC-V International, added. “The Roma platform will benefit developers who want to test their software running natively on RISC-V. And it should be easy to transfer code developed on this platform to embedded systems.”

DeepComputing is handling the engineering for Roma while Xcalibyte, which is a RISC-V International member, is doing the system tuning, and a company called PW is assembling the laptop. For security functionality, Roma is relying on a company called ECP while another with the name Reexen, a designer of audio and signal processing electronics, is working on voice processing, we’re told.

While there isn’t much information available on DeepComputing, we do know the company has the same CEO and founder as Xcalibyte, Yuning Liang. There is much more information on Xcalibyte, which has offices in China and Hong Kong and provides software development tools.

For some reason – and it is setting off alarm bells in our heads – DeepComputing and Xcalibyte decided to include a hook for non-fungible tokens (NFT) and the dubious world of Web3 technologies in promoting the laptop. We get that there has been a lot of hype for this stuff, but there has long been skepticism, and interest has been waning over the past few months as cryptocurrency values continue to plummet.

A line from the press release announcing pre-orders sounded decidedly metaverse-y, mentioning that the laptop will include an integrated cryptocurrency wallet and do other things that would appease venture capitalists going all-in on Web3:

DeepComputing and Xcalibyte are even trying to entice people to pre-order Roma by offering to the first 100 buyers a “unique NFT to mark the birth of the world’s first RISC-V laptop.” Those lucky 100 will also get their name or company’s name engraved into the laptop.

The two companies turned to a company called LatticeX Foundation to handle the proof-of-stake blockchain and NFT features of Roma and another named XC for cryptocurrency.

So… why do we care about RISC-V laptops?

The world is mostly made up of laptops using x86 CPU cores from Intel and AMD, and there have recently been more notebooks entering the market with Arm-based processors, so the idea that we may get a third tier of mobile PCs with a non-proprietary ISA is novel by itself.

But there must be other reasons that would compel anyone — an individual, a business, any kind of organization — to switch to a young ISA when desktop software support for x86 has been solid and Arm is making steady progress with vendors.

RISC-V can be appealing to engineers because of the modular nature of the ISA, giving them the ability to optimize and extend their SoC designs to meet different computing needs.

There has also been a promise of better performance and efficiency in the future. The CEO of RISC-V chip designer SiFive told us in March he expects SiFive’s designs to rival Arm on performance while providing better efficiency, and that could extend to PCs by late 2025.

One of the more prominent drivers for RISC-V laptops right now is the need for countries, such as China and Russia, to secure their own supply chains.

Russia has been largely cut off from using non-trivial processor technology from Intel, AMD, Arm, and others, due to its ongoing invasion of Ukraine, and China, an adversary to the United States and other Western countries, is keen on developing its own technologies to deal with any export bans.

This push for Russia and China to ensure they can keep the chips and devices flowing within their countries have prompted them to turn to RISC-V as part of the equation. They can do this thanks to RISC-V’s open licensing, according to RISC-V International.

In May, Redmond told us that RISC-V International is “not required to block anybody from engaging and participating,” though the organization will make changes if needed.

“If things go the way of sanctions that are heavier on a country level, we may need to pivot, but at this point we are abiding by things and [are] in very close contact in understanding what are other open source and global organizations doing,” she said at the time.

The Roma laptop is one example of this RISC-V push by China. The country is also expected to roll out 2,000 RISC-V laptops by the end of the year through the Institute of Software at the Chinese Academy of Sciences. Russia has been looking into RISC-V for laptops, too.

If you want to read more about geopolitical concerns around RISC-V, you should check out this piece. ®