Glebe Farm, a British oat producer, has taken over the billboards in Victoria station today (9 May) to poke fun at the court case it won against fellow oat company Oatly last summer.

In collaboration with You Agency, the minimalist billboard simply displays an image of the family-run business’ oat milk with the statement: “Oatly sued us. We won. Now help us pay off our lawyers.”

A High Court judge rejected the claims and ruled in favour of Glebe Farm’s brother and sister duo Philip and Rebecca Rayner in August 2021.

Another billboard read: “Oatly sued us. We won. Because you can’t beat true. British. Oat milk.” 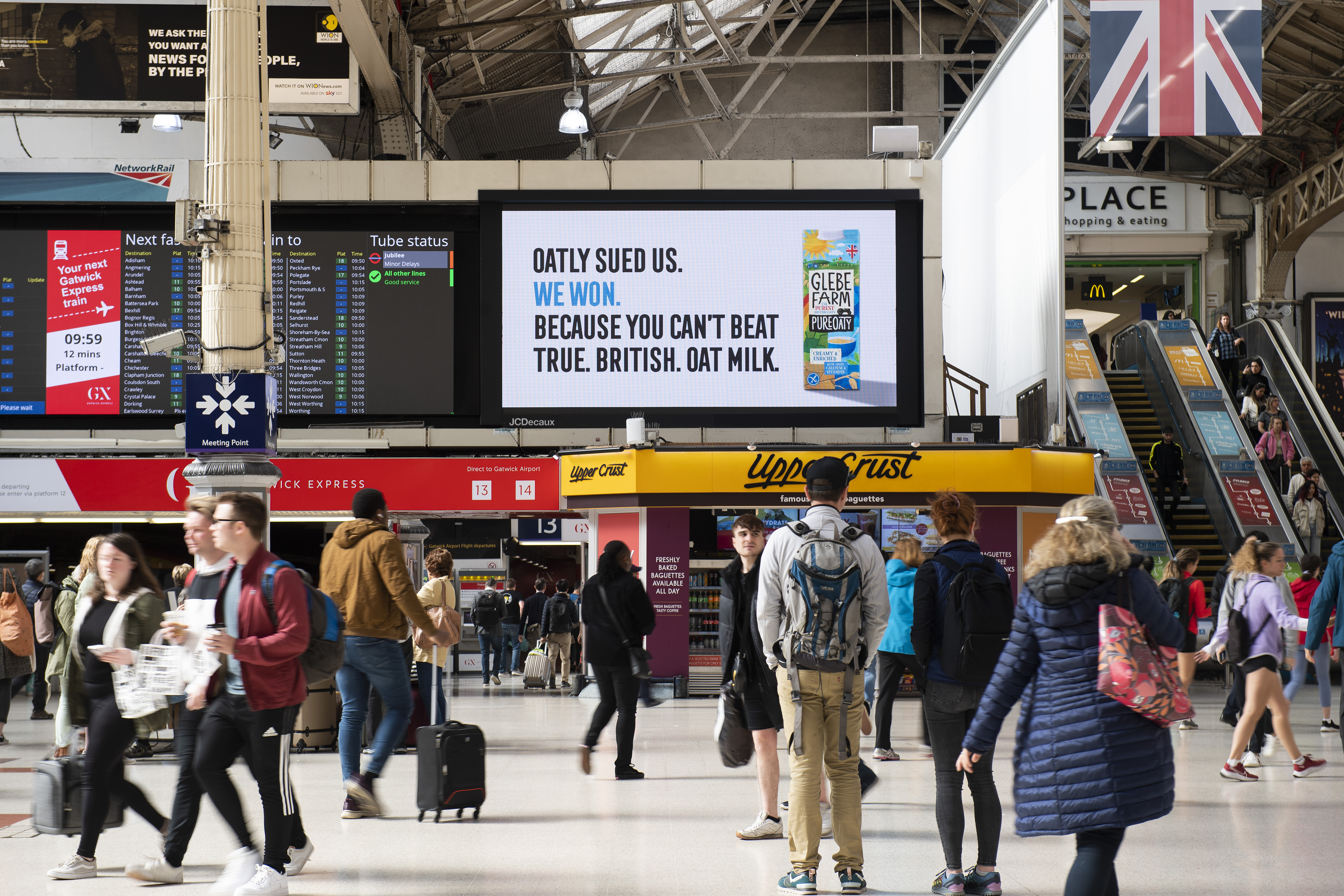 The Cambridge-based business claims to make the most sustainable oat drink in the UK with best-in-class carbon emission figures in 2021 for their UK produced oat milk, whereas 85% of oat milk is imported into the UK by other brands in the market.

“At a time when sustainability and championing local, British brands is at an all-time high, we wanted to remind people with a playful campaign that our oat m*lk is the most sustainable oat m*lk in the UK – and travels far less ‘food miles’ to get to customers than most other brands,” Philip Rayner said.

“After winning the court case against Oatly, it has made us want to be more disruptive in our campaigns. We’re known as the oat m*lk brand that beat Oatly, but we’re so much more than that. We are true, British oat m*lk. And proud of it.”

A recent study commissioned by Glebe Farm and carried out by Perspectus Global showed 92% of 2,000 surveyed Brits would prefer to buy dairy-free milk made from UK ingredients, with two-thirds saying it’s because they want to support British farmers.

Rayner commented on the court case in August after the win in an announcement on the Glebe Farm website: “We have had the threat of this court case, which has pitched our challenger brand against Oatly’s multinational business, looming over us for more than a year,” he said.

“We have always felt certain that we have done nothing wrong, and we were determined to fight Oatly’s claims that our brands were similar – something that is now proven to be wrong.

“You only need to look at the two products and packaging side by side to appreciate how different these brands are, and how unnecessary this legal action was.”

Lucy Hopkins-Parkinson, a spokesperson for Oatly, said: “Nice job on the billboards! We’re flattered by the shout out.

“We can’t wait to open our UK factory in Peterborough next year where we’ll also be buying oats from British farmers, and creating around 200 new jobs.

“We wish our future neighbours well as we all work towards our shared goal of a more sustainable food system. See you in 2023!”